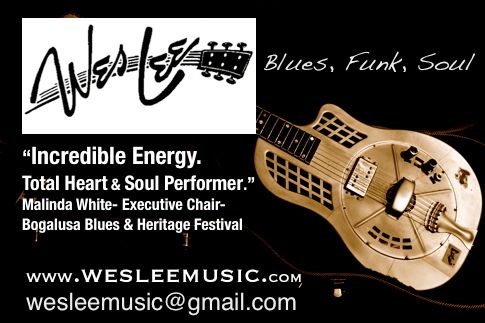 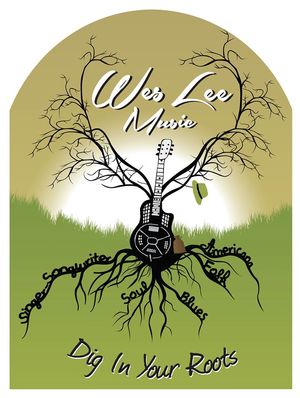 Wes Lee has appeared solo in many festivals throughout the Southeast including The L.A. Songwriter's Festival, King of the Delta Blues Festival, The Juke Joint Festival, The Roots Reunion, Hubfest, The Jimmie Rodgers Festival, Robert Johnson Remembrance Festival, Natchez Bluff Blues Festival, and has performed for the Mississippi Governor Haley Barbour. Other times he has been accompanied by his band 'Blue Roux' at Bogalusa Blues & Heritage Festival, 59/20 Festival, Margaritafest, South Mississippi State Fair, Equinox Festival, among others. Wes and Blue Roux headlined the Stella Blues Festival in 2014. See the gallery for the beautiful poster.

Wes Lee has made his home in Mississippi since 1995. His musical career started on brass instruments in the genres of Jazz, Dixieland, Swing, Classical, and Funk but switched to guitar in 1997, to further embrace the Blues. He quickly became a strong Bluesman in the Southeast and has shared the stage with Tab Benoit, Tinsley Ellis, Kenny Neal, Sonny Landreth, John Mooney,  Greg 'Fingers' Taylor, Steve Forbert, Ruthie Foster, among others.

Wes has self produced 10 CDs of WesLeeMusic, beginning with Tone City(1998) and Anything But Wrong(1999), which are Electric Blues. His style and songwriting have evolved into a dynamic solo artist as shown on Live & Alone(2010), The Shack Sessions(2011). In 2012, the Six Pack of Soul was a full band tribute to the Memphis Sound, Wood & Steel (2013) was recorded at legendary Studio In The Country. 2015 sees the January release of Jericho Road Show- Times Ain't Like They Used To Be and in June, Blue Roux. 2017 brings Lucky 7, with 2 tracks recorded at Studio A at Fame Studio, Muscle Shoals, Al. 2018 brings the release of Sweet n’ Salty, I Done Told Ya, featuring Libby Rae Watson